I've never been a runner. And I've never even thought of competing in any sort of sports. Since I moved to Austin, however, I have been diligently working my way toward becoming a runner.  At the moment, I am doing 5 miles every week using the Galloway Method of 2 minutes of walk time with 1 minute of run time.

A friend told me about a 5K race in which she was walking. I agreed to walk it with her. She's much taller than I am, with much longer legs, so walking at her pace might have been challenging had I not been doing my weekly 5 miles.

For those who don't know, of which I was one until recently, a 5K is actually 3.1 miles.  I knew that, in theory, but the reality of doing this 5K race made it clear to me that I'm in better shape than I thought. The 5K actually felt pretty easy. 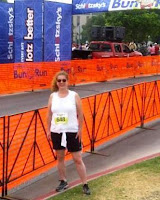 For a lifetime non-athlete, I think I'm free to pat myself on the back for this one.

I did a 5K. I have the shirt and number bib to prove it.

I want to do another. Then a 10K. Then maybe a half-marathon and, ultimately, a marathon.
Posted by Michelle Brown at 2:39 PM